He leaned back
Arms by side
His shoulders straight
And sang.    He felt
The power of his voice
Anchored by his
Rock-like pose
His energy
And  (say it)  joy
Belting long strong notes
In front of the good
But rag-tag band
The joy of being
After all the drugs
The joy of singing
After not quite catching
The peak of the punk wave
The joy of living
After not achieving
The Fame of ‘X’ or Patti Smith
The joy of friends to hug him
After decades in the dark
The joy of the
Old time
Ragtime
Washboard rhythm song
The joy of the bass
The fiddle
And his voice
His own voice
Soaring and alive

Posted by SoCal Yankee at 9:18 PM No comments:

A cord of wood is a pile, neatly stacked, 4' wide by 4' high by 8' long. A city person would be amazed at how much split dry wood it takes to heat a small cabin on an Island off Vancouver for a whole winter. 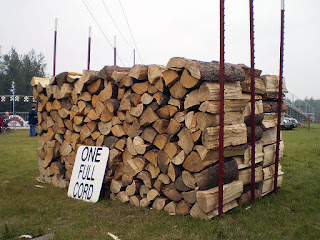 We met a tall, strapping wood sculptor at an art show in Joshua Tree, in the Mojave desert. He talked glowingly of the time he spent on Hornby island, off Vancouver, and how the artist community in Joshua Tree was almost as good as what he had experienced there. We asked him why he had come to this place in the desert, so different from that cold damp island.

It was the heft of the axe,
the solidity of the chopping stump,
the pull of his shoulders as he swung
from Spring to first snow,
one hour every morning before coffee and breakfast,
that kept him sane those fifteen years on Hornby Island.

The tangibility of the task,
the sheer size of the pile
growing bit by bit,
to be sucked up by the ever hungry winter stove,
that part of living - no uncertainty,
ten cords of dry
the reason why.

Angela crept softly
into his periphery,
a bit of red shawl in a summer park,
gentle swaying at a late night gathering,
then finally a touch and spark,
the two of them in a crowded coffee house,
the whole world dissolving into fog.

Winter was warmed by
long nights of talk,
their skin touching hot under blankets,
cold air seeping around the edges,
and the ever dwindling pile
of split wood in the barn.

She said I love you so - but know
that I am a traveler in this place
of high pine and rain.
My home is on a desert hill,
where the Mojave slopes down
to meet the Colorado,
where the relentless sky
finds every hiding place
and purifies my soul.

I’m leaving now - to greet
the flowers of the sage and ocotillo,
to burn away the residue
and find out what I have that stays,
and purge what has to go.

As Angela brings out the tea,
he’ll tell you now,
ten years gone by,
in the desert light of Joshua Tree,
that he came to flee the endless cold.
Ten cords of dry
the reason why.
Posted by SoCal Yankee at 3:00 PM 1 comment:

It’s hard to believe that four years have already passed since President Obama first ran for office in 2008. I was so proud when the Democratic Party made him its nominee, and prouder still of my country when he was elected to office as the better candidate.

The President’s most strident political enemies deride his background as a community activist and claim that he is a socialist. Others assert that he is a closet Muslim, born outside the country.

But there is one issue that is thankfully avoided in public discussion as completely inappropriate – and that is the very young age of the President’s mother when he was conceived and born, and whether or not she was really married. Even President Obama, in his book Dreams from My Father, says that “how and when the marriage occurred remains a bit murky.”

I think quite a bit about Obama’s mother, Stanley Ann Dunham, later known as Ann Dunham, because she was born only three years before me, and this makes her part of my generation. When I think of her, I see myself. President Obama is young enough to be my son, and he was born during tumultuous times that I remember very well.

I also think often about the president’s grandparents, Madelyn and Stanley Dunham, because they stood by their high-spirited teenager and embraced a multi-ethnic family at a time when many parents would not have.

When someone mentions the 1950’s and 60’s, most of us usually recall fun things like American Bandstand, Elvis, and the Beatles. But in 1961, when President Obama was born, it was still a felony in many states for mixed race couples to marry, and the growing challenges to segregation in the south were being answered with considerable violence.

Obama’s grandparents moved to Hawaii with their daughter in 1960 after she finished high school in Seattle. Ann Dunham was known for her enthusiasm and curiosity about life, and shortly after entering college, she was swept off her feet by a 23-year-old Muslim student from Kenya. She was only 18 when her son Barack was born, six months after her marriage to his father in February.

Ann’s experience of falling in love and having to get married was typical for many young women; but to me, the staunch support of her parents during that socially repressive time is quite unusual. The social stigma of an unwed pregnancy, and especially for babies of mixed race, induced considerable fear for all involved.

How many girls were sent away to deliver a baby, to fabricate a husband, or to put the child up for adoption? Whenever my own mother heard of such stories, she would warn me, “Girls who get pregnant are ruining their lives.”

Ann was blessed to have the parents that she did. Even in the island paradise, there was considerable animosity among the various ethnic and racial groups; yet Ann’s parents stood by her and her son. Nine years later they embraced a second grandchild, a girl, whose father was Indonesian.

In August 1961, when President Obama was born, I was one month shy of my sixteenth birthday – ready to start tenth grade and get my driver’s license. The country was struggling with Jim Crow laws, with the fallout from rock and roll, with the burgeoning feminist and free-speech movements, and with the over-all challenge by the baby boomer generation to the stultifying political conservatism and McCarthyism of the 1950’s.

Civil rights activists pressed harder for the country to live up to the principle “all men are created equal.” As I watched the nightly news with my parents, or read the headlines, I saw people staging non-violent sit-ins at segregated lunch counters, and people traveling south (and dying) to help with voter registration drives. There were even demonstrations in San Diego, and an older friend from school spent a weekend in jail. Some of the worst for the country was yet to come.

In September of 1963, when Obama was just two years old, Governor Wallace of Alabama defied a court order admitting black children to a public school in Huntsville. A week later, four children were killed in the bombing of the Baptist Church in Birmingham. Secretary of State Condoleeza Rice was a little girl in Birmingham and knew those children.

Most people I knew supported integrated public facilities, but many still had trouble with mixed marriages. I remember a negative discussion of such marriages by fellow students in college.

President Obama chose to remain with his grandparents and finish high school when his mother went to live with her second husband in Indonesia. It is understandable that he felt he had much to sort out as he grew into manhood.

I also think about Ann Dunham at the time of her death in 1995. She wasn’t even 53. This was the year I turned 50, and I had just started my second year of teaching. Ann Dunham died so young, but she also packed a great deal of living into her short time here. She probably had no clue that she was mother to a future president.

Times are much different now than when Obama was born fifty years ago. Who could have imagined that in 2008 the vice-presidential Republican candidate would present her pregnant, unmarried daughter to the national convention.

We have come a long way, and I hope that as a country we don’t go backward. No matter what people may think of the President’s politics, do they see any of themselves when they consider his personal story? I see his mother as a young girl and I remember the country’s turbulence during my adolescence, and I hope we continue to work toward what is right.