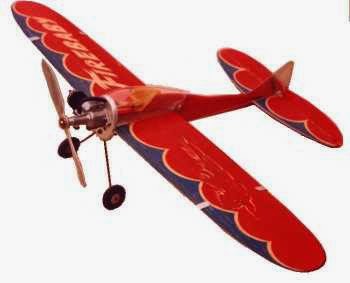 Once, in a dusty attic in my grandmother’s house, I saw the remnants of the model airplanes my father had made as a child. Long as a grown man’s arm, they were made of tiny sticks, lacy and delicate, covered with the thinnest of tissue paper. I could imagine them floating in an open field, like a butterfly, carried on cushions of air.
The models that we made were very different. Their construction was crude, about the size of a serving plate, made of light slabs of balsa wood for wings, body, tail and rudder. At the heart of these models were tiny gas motors which, even with an attached fuel tank, were about the size of a one quarter measuring cup. Once started, the motors screamed like a thousand angry bumble bees. Our ears buzzed, fumes flowed in the blast of air and coated the hands of the boy holding back the plane, while the “pilot” raced to where the control handle lay in the grass.
These models were called “control line” models. Two thin wires ran from one wing of the plane to a handle maybe fifty feet away. The “pilot” held this handle at the center of a circle, and turned in place as the plane flew round and round, restrained by the two wires. Dizziness was always a danger, as was wandering away from the starting place as we turned. If the pilot wandered, the circular flight path could move to where there the edge of the house or the laundry post out in the field would cause a mid-air disaster.
The motors were strong relative to the size and weight that the plane, so the models didn’t so much fly as trail desperately after the propeller as it clawed its way through the air. These models flew fast, so our learning process was about what you would expect. The plane would take off; our attempts at control would cause a few quick up and down oscillations and then finally a dive into the grass.
In spite of our complete lack of mastery of these simple models, we began to build a larger more sophisticated version. This was a completely different project. The wingspan was the width of a kitchen table, and the construction was more like a real airplane, with ribs and bulkheads forming a skeleton which was covered by balsa sheeting. The motor was larger, and surgical tubing ran back from the motor to a separate aluminum tank, the size of a small coffee cup, nestled in the middle of the fuselage. This model took us about a month to build and paint, much longer than the simple slab models we had been flying.
The big day finally came. We had heaver control wires to handle the additional power and weight, and they were longer too. Since we were using up a lot more of the back field and there was less clearance to the various obstacles, we arranged a 4 foot diameter circle of red bricks around the pilot pivot point, so that if we started to wander as we turned round and round, the bricks would warn us and keep us in the right spot.
After a couple of spins of the prop, the motor came to life. Rather than the frantic high pitched scream of the smaller motors, this one had a more satisfactory tone, like a chain saw in full song. My brother held the tail of the model, I ran to the center of the circle, picked up the control handle, pulled the slack out of the control lines, and gave him a quick nod to release the plane.
The plane was still fast, but not as fast and frantic as the smaller models. I actually felt like I had some control, and instead of crashing after a couple of turns I was able to keep it airborne turn after turn. Finally we were really flying!
The crash was so sudden it seemed the world stopped. One instant there was the plane circling fifteen feet off the ground, its red stripe along the side clear in my memory. The next instant all sound was gone, the lines were slack, and pieces of balsa, fragments of fuselage and wing and tail, were sailing through the air. I had somehow wandered out of my circle of brick, and drifted over so that the plane had collided squarely with the six inch thick twenty foot high cloths line post. And what I remember most clearly of all was the aluminum fuel tank, free of the fuselage, gleaming in the sun, as it performed a slow cartwheel, painting a filmy arc of fuel in the clear air as it turned.
We never did much flying after that.

©Frank Kearns 2014
Posted by SoCal Yankee at 3:00 PM No comments: Links to this post