The Ghost of Norman Rockwell 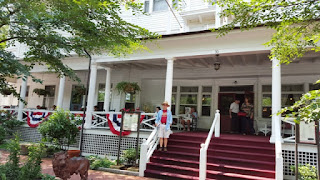 There was art hanging on the walls of the houses that I knew as a boy: my parents’ house and the houses of my grandparents. My family was not intellectual: there were no abstract expressionists, no prints of the energetic squiggles of Jackson Pollack, no copies of the brown squares of Mark Rothko. My fathers’ family was from the fishing towns around , and so nautical themes dominated. There were journeyman depictions of clipper ships under full sail, and simple paintings of little fishing trailers tied up two or three abreast at the local docks - names like Mary Jane or Sarah Ann painted prominently on the bows. In my father’s study was a piece of high art: a print of a Winslow Homer painting, an image of a menacing sea (complete with sharks,) a dark stormy sky with a waterspout in the distance, and a lone man in a small sailboat, helpless against the elements, the mast carried away by the storm.

My mother looked for a different vision in her art. She loved the prints of Norman Rockwell, whose beautifully detailed pictures of American life graced the covers of the Saturday Evening Post during the decades of my parents’ young adult life.

My family had a bit of a connection to Norman Rockwell. In their later years, my mother’s parents lived in a part of rural called the Berkshires. There, small towns, villages really, looked exactly like what a dream of rural would be. Whenever we would travel to my grandmother’s house, we would pull off the turnpike in Lee, then head down a narrow road to Stockbridge, . Norman Rockwell’s long-time home was in Stockbridge. There in the middle of Stockbridge was the Red Lion Inn, a long white four story wooden building dating from the 1890’s. A covered porch extended the entire length of the front of the inn, full of rocking chairs and white wicker furniture. We children would stare out the window as we passed the row of shops that made up Main Street in Stockbridge, then marvel at the flock of people lounging on the front porch as we turned left in front of the inn, headed down to my grandparent’s little hamlet of Mill River.  A print of his painting of this , with the Red Lion Inn at the corner, hung in my offices throughout my working career, and his studio was right behind the storefronts that you see in the painting.

So Norman Rockwell was the painter of my childhood. His depictions of the idealized joys of family and the simple pleasures and pains of seemed to embody the optimistic vision of a middle class post war world that I felt as a pre-teen white boy in the fifties.

My childhood was a small bubble of a world, and I was soon sucked out into the chaotic whirlpool of teenage hormones and struggle for identity, fed at the same time by the cruelty of the Vietnam War, the bloody history of played out again in the assassinations, bombings, riots and turmoil of the sixties. I no longer had much use for my childhood Norman Rockwell.

This summer I went back to the Berkshires. I stayed for three nights in the Red Lion Inn, an experience beyond the wildest dreams of the boy staring out the side windows of my parents’ old car. I also know a lot more about Norman Rockwell now. I have come to enjoy the love and connection he felt for world that he saw. I realized that his world extended beyond idealized sentiment into the hard realities of . I have come to appreciate him again.

Leaving Stockbridge, we stopped at a rest stop on the Mass Pike. I watched a mother walking away from us on the sidewalk. She held the hand of her six year old son, who held the hand of his younger brother. They were both wearing matching yellow tee-shirts in the afternoon heat.

I heard a diesel truck start up behind us. The semi rolled slowly through the rest stop, and came up to us as it was gathering speed to head back out onto the Pike. The two boys turned and waved, and, as the truck passed, the driver sounded two quick blasts of the deep, sweet air horn. The boys held their hands in the air, the mother waved too, and the ghost of Norman Rockwell snapped a quick picture on his cell phone, an image soon to be featured on the next cover of the Saturday Evening Post.