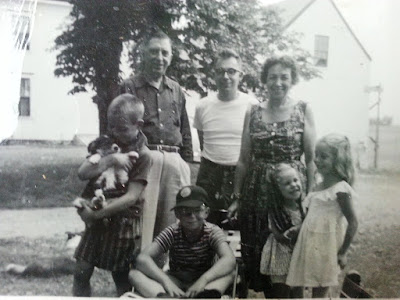 A photograph of a family, 1958. In the front, four young children. A boy cuddles a large puppy, unconcerned with the camera. Two girls giggle and tease each other. And that’s me, sitting dead center, eyes straight ahead.
In the back, the proud grandparents. The grandfather, tall, dapper slacks and collared shirt. The grandmother, a full smile, still a breath of youth across her face. And in the middle, their son, Donald Allen Kearns, plain white t-shirt, black glasses, a hint of a smile, a hint of satisfaction. And who is behind the camera? That would be Ellen, the mother of these four children, proud to capture this moment, her husband’s parents come to visit her family and their new home.
They are gathered stage front, like actors after a play, their rolls and lines finished for now, their relaxed personas released. And as much as we children have studied this photograph in later years, as much as I, the one sitting in middle front, have tried to stare through the surface of the picture, this play was not about us.

It is World War II. A young man, snatched from his study of mathematics, spends years wandering through South-East Asia, much of it on foot in the jungles of Burma. “Vinegar Joe” Stillwell leads a huge Allied Chinese Army, and Donald is part of a small squad of American radio men attached to this foreign force. He crosses rivers sitting in a dugout canoe poled by near-naked Burmese mountain men, 40 lbs of radio gear in his lap. He wakes in the night to the footsteps of Merrill’s marauders slipping out of camp with a squad of Kachin Scouts, armed only with long knives, headed for the enemy lines. He is crossing the Mekong River, bound for Hanoi, when he learns that the war is over. And after a long sea voyage on a ship crammed with 3000 other young servicemen, he returns to a country changed forever.

The heroine has not yet dashed on stage to take her bow. She spends the war years at American International College in Springfield Massachusetts. She studies chemistry, earns her degree, and begins to teach.[1] She is in the Science Club, the German Club. What does she think? What does she want out of life? Perhaps in a moment she will come on stage.
Young men come home from war to a country that has been without them for 4 years. Donald returns to the small fishing town of , . His friend Walter knows a girl up in Springfield, Ellen Wrinkle. He tells Donald, “Let’s take the train up there and go on a double date!” Well, Walter and Ellen don’t hit it off like they thought they would. Walter likes Donald’s date. And Donald and Ellen? They get along just fine. I’s 117 miles by road or train from Fairhaven to Springfield, which doesn’t seem very far when two people are in love.

The courtship. Donald and Ellen wear out the train routes and roads between Springfield and Fairhaven. And letters. Maybe a hundred letters. Ellen saves each letter, folding each one and carefully stashing it in a box in her closet. Donald, being a guy, is not so careful.
Offstage, a Greek chorus reads the one-way conversation preserved by Ellen. “Darling, May I call you that? Your pictures came today: golly, I love you!”
An inch-high pile of letters in much the same vein.

And then several multipage letters. “I’ve been trying to think about this faith you have asked me to pray for, Darling.”
Here is revealed a troubling problem. Ellen is a Roman Catholic, forbidden to marry outside the Faith. Donald? Well Donald didn’t really have a defined faith. As a boy he attended the Unitarian Church. He spent 2 years traveling through the heart of Hinduism, Buddhism, Confucianism and Taoism. He traveled with a foreign Army torn by infighting between the Chang Kai-Shek’s Nationalist Chinese and the Communist Party of China led by Mao-Zedong. His mind is awash with peoples and cultures.
Ellen prays to Saint Francis Xavier. Donald reads St. Augustine and wrestles with logic and science and faith. And in the end, love wins out, miracles happen. They marry in 1947.

Donald and Ellen share an apartment in Providence, Rhode Island, with another couple. They share a kitchen, and hang sheets on a string down the middle of the living room to give each other privacy. Donald works on finish his masters at Brown. Ellen is pregnant. Donald learns he has been accepted into Phi Betta Kappa, a prestigious scholarly society, but Ellen can barely function as her child grows to term. On a freezing day, when the roads are barely passable with ice, it is time to take her to the hospital. They name their first born son Francis Xavier Kearns.
Donald gets his first solid teaching position at a start-up Catholic college called Merrimack. Classes are held in an old gym.  Two boys at home, four years in the rented ground floor of a house perched in a busy intersection in Middleton, Massachusetts. Ellen makes a good friend who teaches her some lessons from the depression. The ropes of running a family on a budget. Where to find the bargains. The secrets of powdered milk and day-old bread.

A move to Orono, Maine, another teaching position for Donald at the University and a place to finish his PhD. Ellen’s first small house. Paint. Yardwork. Two darling girls. A bit of a community.

Then a big opportunity. An important promotion. A return to Merrimack College, to a window office in a fresh brick building in a barren field, to chair the newly created Math department. They buy an old farmhouse in the rural outskirts of Andover, a place where a growing family can really thrive. For they have plans for more: “Cheaper by the Dozen” is Ellen’s text book, “The Sound of Music” her muse.

And here they are in the photograph. Donald’s parents have driven up to visit. He stands proud and confident between them, his house in the background. Ellen arranges the children in front, and snaps a picture. Donald and Ellen are 35 years old, and I remember the feeling. Having become someone. Proud to show my parents our new home. Finally adults, with a whole lifetime still ahead.